On October 23, JSC TEMP Plant took part in the meeting of representatives of machine-building enterprises initiated by the Khmelnytsky City Council within the framework of the “Buy Khmelnitsky” project.

The project is aimed at large-scale promotion of local production. Part of this project has already been implemented through the labeling of food products in the city’s well-known markets.

The project spreads, covering other areas of the region, including the engineering industry. The meeting of representatives of the largest industrial enterprises of the city’s mechanical engineering, with the initiators of the project, was held in warm atmosphere and lively discussion. Ways to promote the products of local businesses under the brand “buy Khmelnitsky” were discussed.

The head of the JSC TEMP Plant machinebuilding department – Kozyuk Alexander, represented the enterprise, told about its long-term activity, production and prospects of development. He also said about the company’s complete readiness to become the part of the initiative, establishing itself as a reliable equipment producer not only at the regional and national level, but also at the international one. 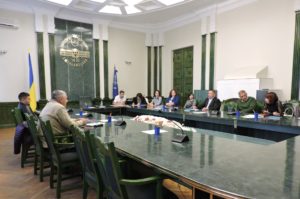